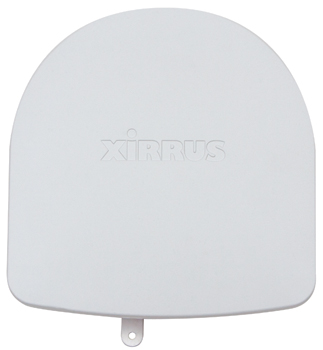 The XR-2425H is designed to meet requirements for extending wireless coverage outdoors or in other harsh environments such as stadiums, arenas, college campus outdoor areas, music festivals, airshows, racetracks and large warehouse freezers. With its multi-radio design, the XR-2425H also makes an ideal candidate for deployment in hotels with challenging RF environments and for high bandwidth point-to-point wireless data links directly connecting networks across streets and waterways.

Extend the Life of Your Wi-Fi Network

Cambium Network Xirrus High Density APs are built on a modular architecture that sustains multiple generations of technologies without a need to replace infrastructure and extends the life of your Wi-Fi network.

Every High Density Access Point with integrated controller and distributed intelligence, eliminates the need for a centralized controller and automatically adapts based to device capabilities for a superior user experience.

Complete Application Visibility and Control in Every AP

Cambium Network Xirrus delivers holistic application visibility based on Deep Packet Inspection (DPI) technology and provides predictable application performance by controlling up to 1,300 applications at the network edge. Applications or groups of applications can be allowed, blocked or throttled and policies can be schedule by device or across the network at specified times of day or days of week.

Cambium Network Xirrus High Density Access Points include Bonjour Director, which allows easy access for Apple devices to access Apple services from across the network, and Guest Access, which provides secure access to guests via self-provisioning with optional sponsor workflow or through a non-IT guest ambassador. Guests can also use social media credentials to login or receive passwords by SMS or email.

With its 2.4GHz and 5GHz software programmable radios the XR-2425H will help you easily make the transition to a 5GHz centric network, when you are ready.

Bring Your Own Device 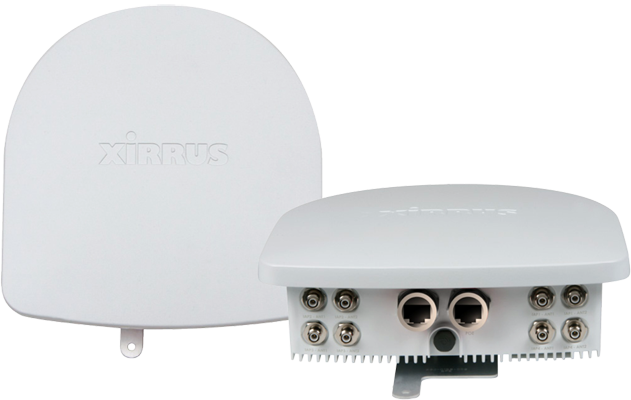 Top and Side View

The conventional method of deploying thin access points tied to central controllers is breaking down under the load of BYOD and mobile applications. Exacerbating the issue are new wireless standards, such as 802.11ac, that can deliver 3-5 times or more than that of 802.11n speeds. Cambium Network Xirrus addresses these scalability challenges with architectural innovations including:

Cambium Network Xirrus integrates the controller function and application-level visibility control into each AP/ High-Density APs to distribute the intelligence. Distributed intelligence eliminates the single point of failure and potential performance bottlenecks of a controller. Benefits of Integrated controller include:

The sectored antenna design of the High-Density APs provides a superior RF control and can be more optimally managed for channel allocation, interference mitigation and user performance management. This directional antenna creates greater separation between radios and reduces interfering.

Wi-Fi being a shared medium requires greater number of radios to support the proliferation of devices. Cambium Network Xirrus APs can support from 2-16 radios in a single platform providing more radios for higher performance. The High-Density APs allow you to:

The flexibility provided by the Wireless High-Density Access Point enables capacity planning without replacement of the chassis itself. This ensures a long, 10-year product lifespan that is adaptive to your business requirements and protects your investment against inevitable increasing capacity demands.

Wireless that is 4X better.

Organizations depend on high-bandwidth for voice, video, and data to and from mobile devices. Today, more than ever, you need high-performance wireless. We deliver it. Our wireless solutions provide wired-like reliability, superior security, and they perform under the most demanding conditions.

Let's face it, the conventional method of deploying thin APs tied to central controllers are failing under the load of 802.11n and will completely collapse with the introduction 802.11ac and 802.11ad. Like the switching market learned some time ago, it's ridiculous to force all network traffic into a single box. This creates traffic jams and single points of failure.

The best way to deploy wireless is with a distributed architecture with multiple radios and directional antennas per cable drop. This is how the cellular industry solved capacity issues in the late 1990's. By placing more radios into each cell tower, they gained created capacity and coverage per location. This enabled the industry to keep up with demand while saving them enormous amounts of cash.

So that's what we did. Our distributed, multi-AP solution is the most powerful, scalable, and trusted wireless platform in the industry. It's easier to deploy. Is more cost effective. And can grow as performance and capacity change.

To ensure sufficient bandwidth, more radios are required. You can either add more two-radio APs or you can add more radios per AP. We chose the better approach. Incorporating 2 to 16 modular APs per Array, we get much greater bandwidth to service more devices. We also get significant savings in the number of APs, cable drops, switch ports, and labor costs.

Fact of the matter is national communications agencies limit the amount of energy a radio can transmit, which restricts the coverage area of that radio. Conventional APs utilize Omni-directional antennas to transmit its wireless signal in a 360-degree pattern – similar to a light bulb – limiting the coverage area.

Wireless Arrays are better in that they focus that same amount energy in a specific direction – similar to a flashlight – giving a much greater distance than those conventional APs. Again, this results in far fewer APs per deployment – typically by 75%.

Traditional wireless architectures consist of thin APs connected to a central controller. The controller resides in the backend of the network and performs control, security and management functions for multiple (often hundreds) of APs. The three biggest issues with this approach are traffic congestion, single point of failure, and unencrypted data from the AP to the controller.

Our approach integrates the controller function into the Wireless Array to distribute the intelligence, much like wired edge switches. By distributing the network, you get better performance and encryption all the way out to the edge. What's more, our approach simplifies the deployment, making it more flexible and cost effective.

What does it mean to you

There are numerous advantages to our approach:

Our Wireless Array platform enables far superior functionality, capacity, and upgradability not possible with conventional AP offerings. We make it possible for your workforce to communicate when and where is optimal for them and your customers.  By improving communications, you improve productivity and profitability.

The following critical technologies make it possible to meet the rapidly evolving requirements for a robust wireless network:

The exploding growth of tablets and smartphones is constricting today's wireless networks. Mandating infrastructure upgrades. Normal approach has been to add more and more APs to grow capacity, but this means costly network changes.

We have integrated the controller functionality into each Wireless Array. We provide a host of functions, including high performance packet processing, networking, security processing, RF control, RF monitoring, inter-Array coordination and network management.

By placing the intelligence and packet processing at the network edge, you will gain several benefits, including:

The sectored antenna design of the Wireless Array provides a superior level of RF control within the system compared to traditional wireless solutions. RF resources can be more optimally managed with this design compared to conventional Omni-directional antenna systems in areas of channel allocation, interference mitigation, and user performance.

A sectored antenna system creates slices of wireless coverage. Each slice uses a unique channel and clusters devices. This approach creates greater physical separation between sectors and devices on a given channel as opposed to Omni-directional antennas that transmit RF in all directions. Directionality of the sectors isolates radios on adjacent Arrays from interfering with each other. This together with appropriate channel design allows the reuse of the same channels by adjacent Wireless Arrays. Channel reuse is critical for a wireless network to operate at high capacity since only a limited number of channels are available, in particular with only three non-overlapping channels in the 2.4GHz band.

With our approach, you get higher RF gain. It transmits stronger signals to the wireless clients and correspondingly receives weaker signals from them since antenna gain works in both directions. Stronger signal provides better communication data rates for a client at given distance, as well as better operational range.

Another costly network component found in conventional offerings are security monitors. Unlike the competition, we have integrated a wireless threat sensor into each Wireless Array, making it possible to have a dense design without compromising radio resources for servicing users.

Most offerings are restricted since both radios in the AP are typically required for servicing users – one operating at 2.4GHz and one at 5GHz. To perform security-monitoring functions, additional APs must be added to the network or one of the two radios must time-slice between servicing users and performing security functions. Time-slicing reduces the bandwidth available to servicing users and is significantly less efficient performing scanning functions as opposed to a dedicated radio resource.

By default, a dedicated monitoring radio in our Wireless Arrays continually scans the RF environment 24x7 covering all Wi-Fi channels in about 10 seconds. When called upon, it can perform additional functions focused on a given channel or threat as required. These functions do not interrupt the servicing of user traffic on the Array in any way.

Functions of the Array's monitor radio include:

The multi-radio design of the Wireless Array enables radios to be configured as a dedicated wireless backbone between Arrays. This functionality is referred to as Wireless Distribution System (WDS).

WDS eliminates the need to run wired uplinks to Arrays in areas where it may be impractical or cost-prohibitive to pull cable. All security and network policies are enforced across the backhaul links, the same as if the Arrays are connected via wired uplinks. Radio bonding allows multiple backhaul links to be aggregated, providing load balancing of traffic and fail-over capabilities for a uniform and fault-tolerant deployment.

With multiple radios available per Array, wireless backhaul can be configured on radios independent of those servicing users. Traditional enterprise APs with two radios are limited to one radio for a backhaul (mesh) connection. This radio must share the same channel as all other APs on that mesh link, severely limiting the total amount of bandwidth available for backhaul. With the Cambium Network Xirrus Array, backhaul connections are dedicated point-to-point links between Arrays and operate without performance compromise.

We can create up to four independent wireless backhaul links per Array and bond up to three radios together in for each link. Using 450Mbps 802.11n radios, each backhaul can offer up to 1.35Gbps of total Wi-Fi bandwidth. The connections support 802.1d Spanning tree bridging services for failover and link redundancy, including with the Array's wired interfaces.

The multi-radio and directional antenna design of our Wireless Arrays provide significantly greater control of RF design and management compared to traditional APs. All radio resources can be individually controlled for band selection (2.4GHz or 5GHz), transmit power, and channel allocation. Control can be done either automatically or manually.

The distributed design of the Array provides a level of processing power and intelligence not available in traditional thin AP designs where much of the resources reside in a centralized controller. By placing these resources at the network edge, the Array can apply proactive and pre-emptive monitoring of operational resources to detect and respond to issues when they occur.

The multi-radio architecture of the Array provides a high level of flexibility in allocating Wi-Fi users and devices among system resources to optimize overall performance. As wireless is a shared communications medium, clients on a given radio resource affect the performance of others using the same resource.